“This is a fascinating and thought provoking volume on youth engagement with digital technology and one that is genuinely transnational and transdisciplinary in flavour. Studies of gaming, video production and social media show how new technologies are woven into the lives of young people, supporting their developing sense of agency and civic engagement. An important contribution to the field.”

Edited by Michalis Kontopodis, Christos Varvantakis and Christoph Wulf, a volume titled “Global Youth in Digital Trajectories” has just been published by Routledge,presenting some of the most significant work produced within the context of the DIGITMED project.

You can find the book on the publishers website or you can preview it on google books. Below you can read a brief description as well as the contents of the volume.

Global Youth in Digital Trajectories explores the most recent developments regarding youth and media in a global perspective. Representing an innovative contribution to virtual research methods, this book presents research carried out in areas as diverse as Greece, the Netherlands, Germany, Brazil, Russia, and India. The volume examines which new anthropological, and cultural-historical conditions and changes arise in connection with the widespread presence of digital media in the lives of the networked teens. Indeed, it is highlighted that the differentiation between an offline world and an online world is inapplicable to the lives of most young people.

Chapter 4: Digital Filmmaking as a Means for the Development of Reflection: A Case Study of a Disabled University Student in Moscow

Instead of an Epilogue: Iconophagy: Impact and Impulses for Global Youth & Education

What is the potential of digital filming and multimedia use for school, youth development and community life across the globe?

Trying to answer this timely question, the ‘DIGIT-M-ED’ Marie Curie People’s Program international research staff exchange scheme “Global Perspectives on Learning and Development with Digital Video-Editing Media” took a critical distance from technological determinism; through a series of workshops, small-scale research projects and training and data-analysis sessions, senior and early-career scholars from UK, Germany, Greece, Brazil, India, and Russia came together not in order to explore digital media as such, but the various and different practices that involve digital media in young people’s everyday life contexts in all those countries.

The focus of the investigation was on the digital capturing, editing and circulating of audio-visual data employed by young people. The various research teams investigated media practices such as tubing, filmmaking and gaming. Each team explored how young people, in their respective countries, employ these technologies as means for self- expression and communication with others. A specific focus concerned youth experiencing difficult situations such as: economic crisis in urban Greece, marginality in São Paulo outskirts, and disability in Moscow. Another focus concerned emerging youth protest cultures in India and Brazil. In all these practices digital technologies played a significant role in facilitating youth expression and communication.

The project’s main achievement has been the elaboration of an interdisciplinary, cross- level methodology for cross-analyzing a) psychological processes, b) the design of media interfaces and c) the on- and off-line collaboration among users while taking under consideration the broader social, cultural and historical contexts of media use.

This innovative methodology, the results of the various case studies and the implications for education and policy-making have successfully been presented and discussed in a series of workshops as well as in international conferences around the world.

The results will be materialized in an edited volume (to be printed in early 2015) as well as in further research proposals (a first draft proposal has already been edited and circulated among the partners).

The interdisciplinary international research staff exchange contributed thus to advancing the current understandings of the potential of multimedia and digital filming for teaching, learning, and youth empowerment – a topic with major implications for Europe and the whole world. Solid research synergies between German and Indian traditions of anthropological and sociological youth research, British scholarship in media analysis, Greek and Brazilian educational and youth research and Russian learning theories were established – which offer a fruitful ground for further research and long lasting collaboration between European and third country partners, in particular in view of setting-up joint research projects and research training activities.

By bringing together some of the world’s leading senior researchers with talented early career scholars from Europe, Brazil, India and Russia, DIGIT-M-ED offered advanced training in innovative approaches and research methodologies and created the much needed space for a network of early-career researchers to develop. This network is now preparing the next project: HyperConnecting Schools

Of course a lot of work remains to be done since DIGIT-M-ED was a small-scale project (with total costs of less than 100.000 Euro). Still, the project addressed directly the following issues which are of high priority both as seen from a European perspective and on global level: 1) media and competitiveness in a knowledge society, 2) media, youth policies and social exclusion, 3) well-being of democracies and political participation, and 4) promoting sensitization to cultural diversity and social justice through media.

b) conference papers and joint publications

d) integration of the produced knowledge into post-graduate teaching at the Summer University of Cultural-Historical Psychology in Moscow, Russia and the London Lab at the Institute of Education in London, UK.

During the Digit-M-Ed meeting held in São Paulo (Brazil) between May 10th and 17th, academic researchers as well as teachers and students from public and private schools presented papers, discussed ideas and shared media production in educational context. The use of technology in human interaction passes through daily social activities and the debate about the employment of electronic devices in teaching and learning is crucial for the development of school at the present moment.

Education prepares itself for new social trends. Since new media has transformed the communicational landscape, it is important that schools follow these updates. Even though, Digit-M-Ed scholars point out that this must be a conscious process, which intends to introduce students to the informational and technological era with critical thinking and knowledge about the phenomenon, rather than focusing only in technicity. That was the basic concern of all participants in the meeting.

Among participants of the event, organized by Digit-M-Ed Brazilian Team, Dr Jeff Bezemer (Institute of Education – University of London) ministered a mini-course, “Learning Platforms in a Changing Social Semiotic Landscape”, German researches from Freie Universität Berlin, Dr. Nino Ferrin and Dr. Martin Bittner, presented workshops about the creative use of media and technology in educational environments.

Lectures on Digital Literacies in Brazilian Contexts were attended by Dr. Jackeline Rodrigues Mendes (Universidade São Francisco), who spoke about identity and inclusion aspects on indigenous digital productions. Under the same theme, Professors Ana Cecilia Couto Simões and Elayne Fernandes Pinheiro, both from Butantã Board of Education, shared video productions made of public school students from São Paulo.

Significant aspects of the meeting were expansion and strengthtening of social networks, knowledge sharing and deepening hyperconnexion between schools. It was a great opportunity to hear the impressions of students involved on Digit-E-Med, as well as promoting videos produced in their educational contexts. The meeting was held with the support of FAPESP, European Union/ Framework 7/ Marie Curie and PUC-SP. 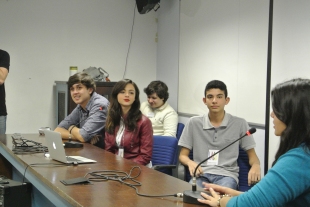 Working in and with Media. Language and Translating as youth practices of mediation in social media by Martin Bittner (Freie Universität Berlin & German Institute for International Educational Research BBF/DIPF)

Digital Media and Education. The role of media in the daily lives of marginalised young people in Europe, Brazil and Russia

Summary: Research on digital media is booming. However, the methodological aspects of research projects focusing on youth and learning via digital technologies in different areas of the world are not dealt with sufficiently in the literature. Qualitative research that explores the use of digital technologies by young people from around the globe as seen from the young people ́s perspectives is limited. The Forum will discuss the interdisciplinary research project ‘DIGIT-M-ED’, a Marie Curie People’s Program research staff exchange project which concerns the social, cultural, media-analytical, and educational dimensions of digital media practices. Project groups from the participating countries (Brazil, Russia, Germany, and Greece) will present different approaches – as (post-) Vygotskian learning and developmental research, multi- modal analysis of digital technologies, and anthropological investigations with young people – for collecting, compar- ing, and contrasting data.

New movie by pupils in Greece

An amazing short movie is made in the context of the “Hyperconnecting Schools” project by pupils in Rethymnon, Greece. It is called: Pupils’ views, from Réthymno to the world!

More films on our you-tube channel:

Childhood and Youth in the Digital Age: Key Issues and Debates

More and more children and young people from all over the world come of age in virtual social worlds such as World of Warcraft or make friends in social networking sites such as www.yoursphere.com. Digital technologies alter the ways how children play, learn, socialize and consume. They also enable children and young people to express themselves in public forums by combining different modes of communication. Are social media platforms, video games and smart phones dangerous for the children and youth? Or do these media open automatically ways for children and young people to be more engaged in school and community life, learn in multimodal and interactive ways as well as share information on transnational level? How to take critical distance from both “cyber-critics” and “cyber-utopians” and examine the various discourses around children and ICT? The teaching module “Childhood and Youth in the Digital Age: Key Issues and Debates” provides students with theoretical and meta-theoretical tools so that they are able to recognize and respond to core debates such as:

Not always easy, but eventually enriching, cultural differences appeared in the DIGIT-E-MED Meeting that took place in Greece last October/2013. Even though we, the participants, are all academics, nothing better than our researches to show how different we are and how human are our emotions. Dedication and passion for academic investigation probably are the only characteristics that the whole group shares, however, what more could we ask for? Diverse voices spoke, stood their own ground, made everybody sensitive towards their work, why not say, perhaps, cause? READ MORE HERE

The Department of Psychology, Faculty of Social Sciences at the University of Crete in Rethymnon, Greece is kindly inviting all interested colleagues to participate in the DIGIT-M-ED International Conference “Digital Media Research: Methodological Approaches –  Global Perspectives – Educational Challenges” on Monday the 21st  of October, 2013. The contact persons for this are: Sofia Triliva and Manolis Dafermakis (contact email: triliva(a)uoc.gr).

The programme is the following:

For the detailed programme of the workshop and the book of abstracts click here: Rethymno Crete October Meeting Proceedings and Abstracts